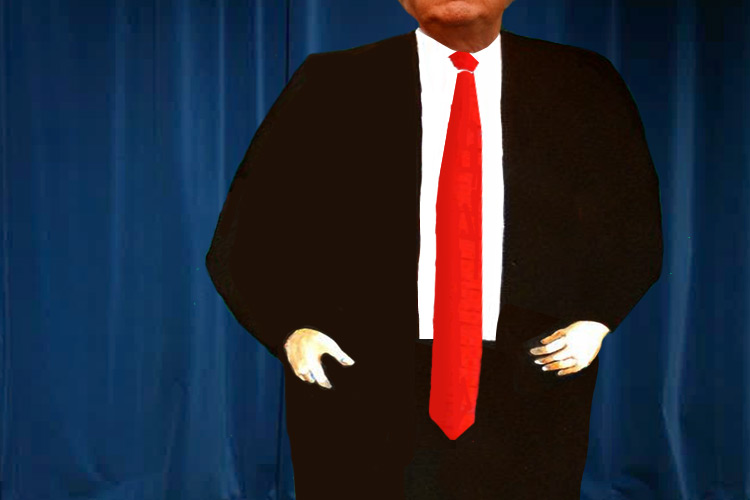 There are those who believe art is created through a certain self reflection, a minimum requisite of peering into the soul. Politicians rarely deal in this process. Governance, however, at times having trouble looking into its own heart, should at least take a look into the eyes of its citizens. Or to use a term politicians may understand better, its constituents.

This past week America has seen another chapter in the continuing exchange of a nation that has not moved any closer to being unified since the swearing in of the new administration.

Art sometimes manages to cross the line into politics, and vice versa. Earlier today, this line was crossed then redrawn as 16 prominent artists, authors, performers, architects and others from the Committee on the Arts and the Humanities submitted an open letter of resignation to the president in protest of his response to the recent Charlottesville incident which many understood to be condoning of the behavior of hate groups.

Excerpt from the letter:

The false equivalencies you push cannot stand. The Administration’s refusal to quickly and unequivocally condemn the cancer of hatred only further emboldens those who wish America ill. We cannot sit idly by, the way that your West Wing advisors have, without speaking out against your words and actions. […] Effective immediately, please accept our resignation from the President’s Committee on the Arts and the Humanities. […] Supremacy, discrimination, and vitriol are not American values. Your values are not American values. We must be better than this. We are better than this. If this is not clear to you, then we call on you to resign your office, too. –Thank you

Where previously the president has been all too outspoken and quick to react when the terror came from without, his handling of this domestic incident was considered less than adequate, and more disconcertingly, ambiguous. Even when performing at his best, the message has often been one of smugness and conceit rather than that of solace or empathy, as once again witnessed after the more recent tragedy in Barcelona.

The resignation of these individuals serving on this committee comes on the coat tails of the resignations of numerous members of the business council. (Yes, sometimes art does follow commerce.) The concern now is that with the already diminished number of conscientious individuals leaving the cabinet or advisory committees, we are left with those, not only unconscientious and unqualified, but extremely irregular for the responsibilities entrusted them.

Betsy DeVos, the highly mis-educated appointed to head the Department of Education; Scott Pruitt, the distinctly un-environmental individual appointed to head the Environmental Protection Agency – the responsibility for which in his own words he described as protecting American businesses; Rick Perry, a remnant of the McCarthy era who wanted to abolish the department of energy among other things, appointed as the Secretary of Energy; Ben Carlson, who has been the greatest critic of Housing and Urban Development and furthermore a peculiar antagonist to urban community interests, appointed as the head of Housing and Urban Development (only slightly less absurd than the nepo-nozze-tism of Lynne Patton, Eric Trump’s wedding planner, appointed to head its Region II); Tom Price, who wants to take away health care and human services for Americans, appointed as the secretary of – exactly – Health and Human Services. The list goes on.

There is not a lot of soul searching in these departments and no letters of resignation forthcoming from their desks as they continue to further their programs toward the frightening “utopia” they envision for themselves. While we are on the subject of re-writing history, the Bush era in hind sight suddenly seems like the Age of Enlightenment.

Now, with approval ratings down, the people have spoken. No more asking for the magic words from the mouth, or the twitter account, of the spouse in this loveless marriage. The truth is out. Or rather, the truth which had been out since before the campaign trail can no longer be dismissed, tripled-down by the man himself as he thrice refused to disavow.

The members of congress, who held the majority as the administration’s party, are quickly becoming scarce in indulging the executive branch. Another attempt at introducing the articles of impeachment might actually stick this time in the lower chambers since a graceful bowing out of the commander in chief was never written in the Art of the Deal.

Still, this seems only the beginning. Even as I write this people are organizing rallies under the pretext of “free speech” – thinly veiled given the roster of speakers defending violence, if not in extremely poor taste in the wake of recent occurrences. This willingness to forego the freedom of thought while demanding the freedom of speech invokes the distress of Tocqueville. Perhaps this kind of perverse sense of entitlement should be met with some sort of compassion, as we shall never truly understand the grievance they bear.

We may remember Charlottesville as the little battle ground of a modern American civil conflict. We can thank the former members of the Committee on the Arts and the Humanities for bringing the discourse into the arts arena. Now we can reflect twice before erecting any statues of this particular lost cause leader. And if we ever do, I would have to nominate an “artist” like Koons to conceive it; this way we could really close the ring where tragedy becomes farce, as Churchill might have described.