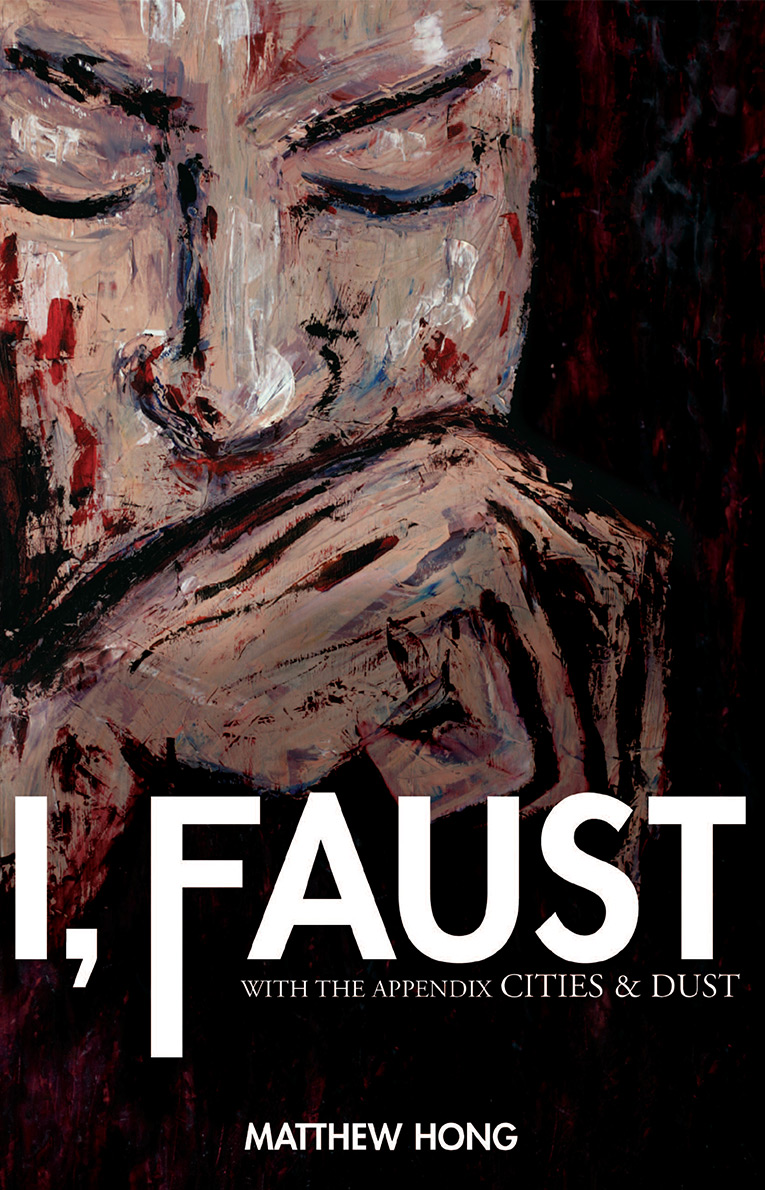 “Whereof one cannot speak, thereof one must remain silent.” Wittgenstein reminds us of the tautology. The opposite holds equally true. Historical Necessity. There is also Poetic Necessity.

The following selection is an epic poem. I, Faust, now after some twenty years in the making, still, in many ways, I concede, seems scarcely the beginning. And as such, you will be forgiving in your reading.

The epic poem is a form that is lost. It is a form that is difficult to take on, much more difficult to complete, and recognition, if any, almost always irreverent. Northrop Frye says, “The epic is not a poem by a poet, but that poet’s poem,” adding that it is not possible to have more than one, with the exception of course of Homer, who had two. It took Goethe sixty years for his Faust. Perhaps I still have a long way to go. I believe Zeno had something to say about this. Having spent the better half of my life towards this work, one might suppose that its reason for being would be self-evident, as in the form which has evolved. This, however, remains to become so. I have had many demons to struggle, as it were, questioning my endurance and the sheer feasibility of this undertaking. One could premise a book solely on the virtues of this attempt. I shall not be the one to do it. I still have many things I would like to add or take away from the current text. There is a lesson to be learned in letting go. In the end, it may be that the poem simply is.

Contained in this edition is the appendix. It is a selection of letters and abstracts of reflections gathered over the same twenty year period as the working of I, Faust. What can I say? Pure indulgence. Certainly I could not call upon that same pretext of Poetic Necessity. Here I shall plead, necessity of the social type. One easily acknowledges the occurrence of such musings on the peculiar part of the poet. To explain the act of binding it with the manuscript proper would require further investigation. An argument that the appendix aspires to be a literary piece unto itself can be fashioned. Indeed, it carries its own title, Cities & Dust. This argument, presumably, for it to be worthy in the final count, must be conceived within the text itself. For now, we might make an allowance for this epistolary post-script of sorts in the present state for its sheer eagerness to further substantiate this edition, even if only with respect to volume. And, though one might deduce that the letters were excavated of certain extraordinary moments, here I shall forewarn that too often these entries are equal to the banal. The reader would show compassion in taking them to be witness to that existence which was to become a fact for the author in the writing of this poem. Whatever it be, like a certain phenomenon, I can only speak of its effect – its cause remaining veiled. Considering the text of the poem and the appendix together, one perceives sufficient intimation of the other in the regard of each. Without deferring to call them two halves of whatever whole, one sees a kind of reciprocity between the two entities beginning to emerge. If one is the interior, the other, exterior, and vice versa. One is the manifestation while the other is the socio-historical climate which precipitates it. The two inform each other in the sharing of their semblable event history, or genealogy – their independent evolutions having procured parallel paths.

This recalls other incidences of this literary event often posthumous and of much more merit than that of my own present attempt. Kafka, Crane, Stevens, et al. The integrity of this device is generally born of the passing away of the author, then championed by the respective trustee towards the greater understanding of the artist’s work. It would then follow that with the case at hand, the integrity of the work and the life of its author are mutually exclusive. Granted. I shall not presently involve this dichotomy. The evolution of this piece would perhaps later arrive at its own justification.

I should be wise in forthcoming with the necessary preemptive measures, such as those disclaiming any resemblances to real people, real lives, etc. – this thing composed primarily of moments which were funded in importance more in the metaphysical realm than anywhere else. But alas, in the end, I will admit that it resembles all too well a certain reality undeniable. Nonetheless, I have stricken all proper names of people and replaced them with those of cities, eradicating all allusions to anything delicate other than my own emotional and spiritual state. As such, any libelous tendency is targeted at myself and falls under the auspices of a poet’s prerogative of self-deprecation, the perennial clause which grants us such license.

Concerning the condition of this manuscript entire, I am once more without pretext. Atrocities may abound. And, the lack of structural soundness of an abstracted work-in-progress, or, the more important half of this tautology, a work not-yet-complete, is all too present, resulting in these parts which feign not to predicate a whole. The ostensible inconsistencies are a natural consequence. In short, this is a curious presentation, the intent of which I am not prepared to defend. Enough. Justice, then, is served, not to the written word in the current outing of this manuscript, but to those people without whose support I could not have made it thus far.

Therefore, to no occasion, I have published this text for the pleasure (or pain) of a few friends.